The commercial test operation of 777m “Long freight train”, which is twice the length of the high speed passenger train, KTX-1(20-cars, 388m) has been conducted successfully on the main line of Gyeongbu Line from Seoul to Busan for the first time in Korea to lay the ground for promoting Korea’s sustainable railway logistics business.

KORAIL announced on July 19 that it has succeeded in conducting commercial test operation of a 50-car long freight train from Seoul to Busan.

The test operation of the long freight train has been implemented to come up with an self-resilient strategy to overcome continued operating loss due to COVID-19
-It can be the new revenue earning model for KORAIL to adopt smart railway logistics system such as the long freight train to promote management renovation.

KORAIL currently is facing the operating loss of more than 200 billion won(150 million Euro) per year in the railway logistics business alone. In order to overcome this chronic deficit structure, it is necessary to establish a logistics transportation system that can transport at least 64 freight cars at a time. Thus, KORAIL carried forward a test operation of a long freight train that connected 50 cars as the first step.
- KORAIL aims to create a continuous revenue earning model by the long freight train business which would not be affected by any critical situation such as COVID-19 to reinforce the financial solvency.

It is the first time in Korea that 50 car freight train have run a test operation on the commercial railway line, Seoul - Busan section, on where many other commercial trains are operated including general passenger trains. 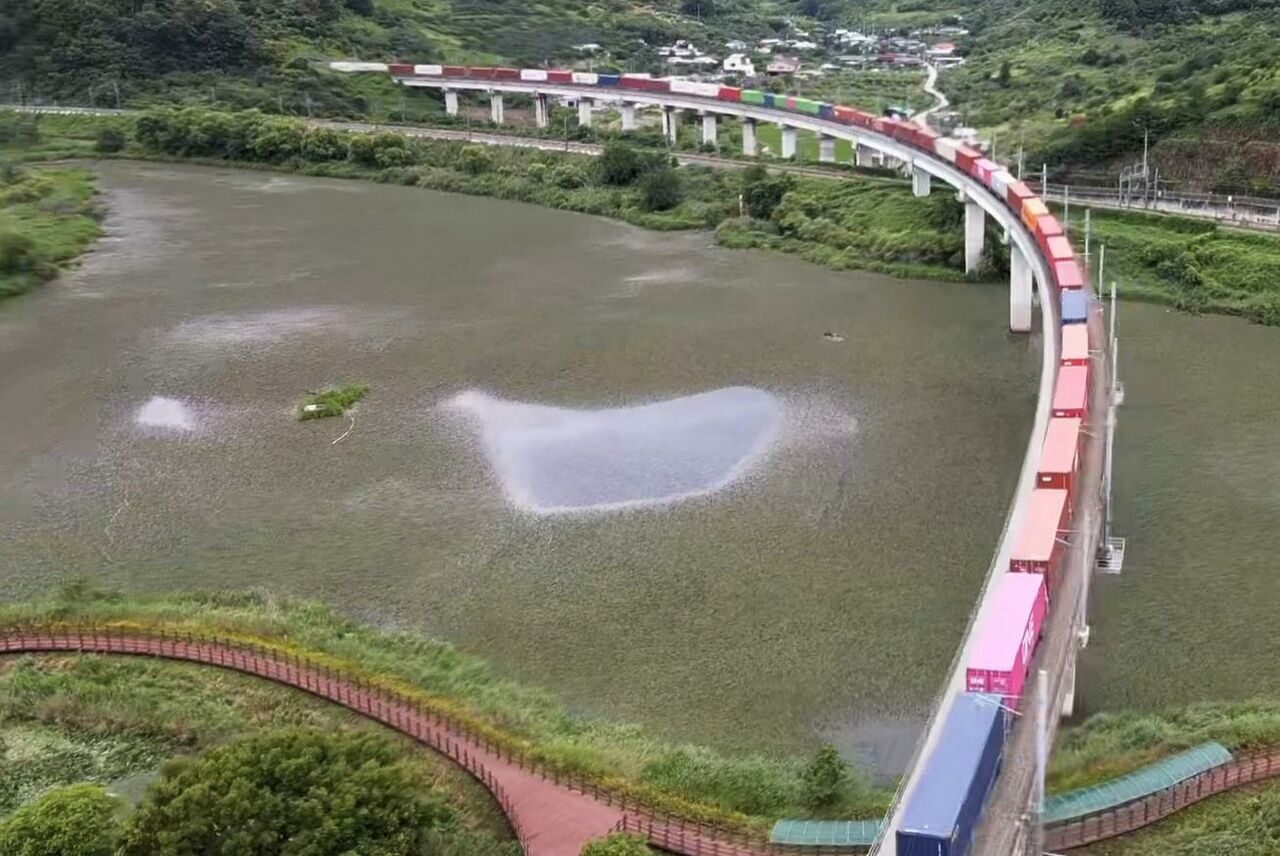 A 50-car long freight train with a length of 777m, which is the first operating in Korea, passes through the bridge.

The train was carried out with two electric locomotives pulling 50 container wagons in a general control method. Containers were loaded with high value-added freight to export abroad such as electronic goods and automobile parts to make the same conditions as the actual operating situation.
- The long freight train, which had left Seoul around 5a.m., arrived safely in Busan around 11 a.m., running 402.3km. 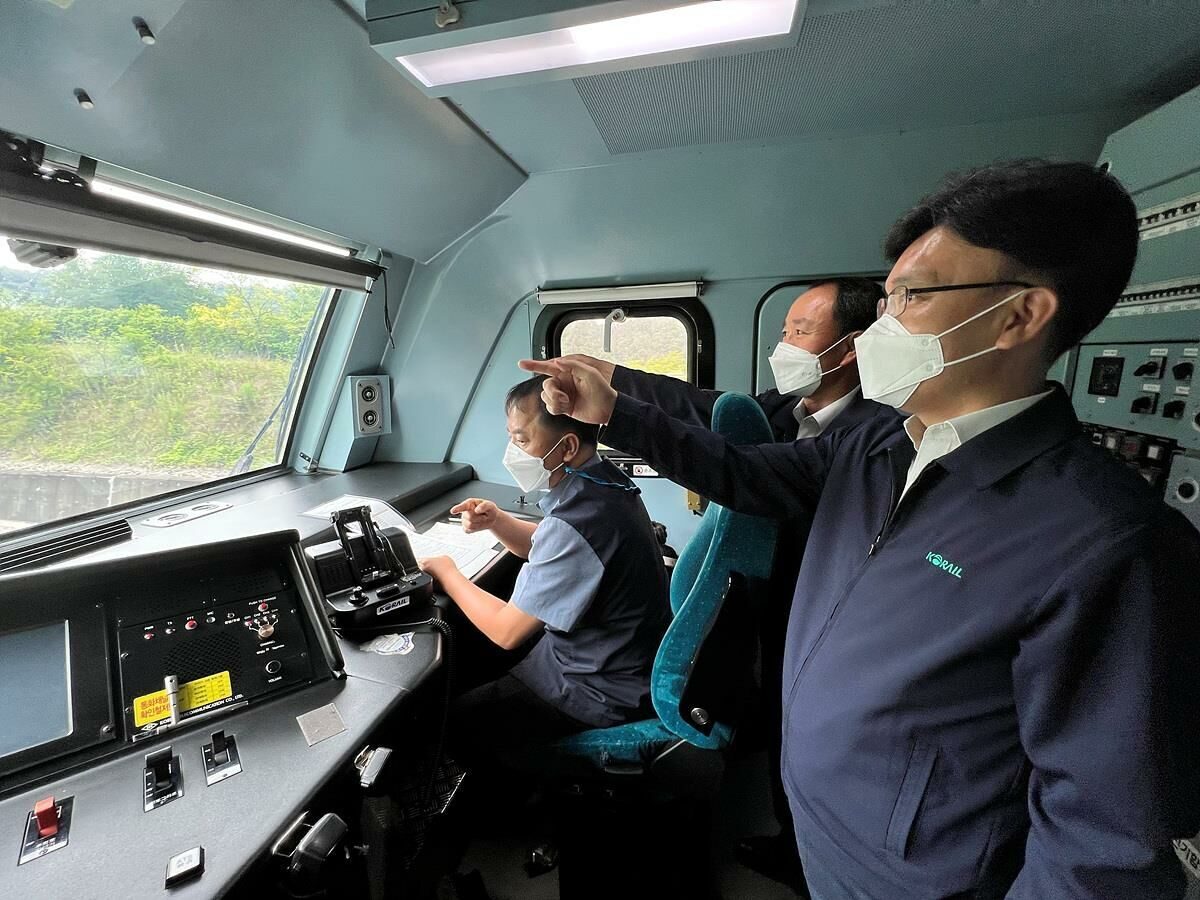 KORAIL’s president and CEO, Na Hee-seung (right in the photo), is checking the test operating process by getting on a locomotive of a 777m 50-car long freight train that conducted commercial test operating on the Gyeongbu-line, from Seoul to Busan on 19 July.

Unlike the countries which lead railway logistics business, Korea’s railway length is relatively short due to its small land area and the railway disconnection of Trans Korean Railways. Under such circumstance, KORAIL has taken somewhat passive position in developing long freight train to carry out mass freight transport for long distance.

- Furthermore, unlike the neighboring countries that have railway length of 700km to 1,500km or more, long enough to operate railway logistics, such as China and Russia, Korea's average railway logistics operating distance is relatively short as 257km.

Despite all the difficulties, strong initiative of Mr. NA, has made it successful to carry out the test operation of long freight train.

- Since his inauguration as KORAIL’s president and CEO in November 2021, Mr. Na has proclaimed a new strategy to improve KORAIL's business environment and overcome operational loss in logistics business. He prepared a plan in stages to adopt the long freight train through the cooperation with the experts in various railway fields to solve the technical problems, and have successfully completed the commercial test operation as the first step of the plan on 19th July.

- It is significant that it has adopted a plan of operating long freight train that can be implemented in accordance with domestic conditions.

It is expected that the environment of KORAIL’s logistics business can be improved significantly by operating the long freight train to utilize the advantage of railway’s mass transport. In addition, it can contribute to enhance the competitiveness of national logistics business and achieve carbon neutrality by increasing the modal share of railway logistics transportation through operating long freight trains and implementing smart mobility system.

- Currently, the average number of the container cars that KORAIL operates at a time is 33. However, the transportation capacity of the 50-car long freight train is 52% higher than the existing ones.

- In addition, KORAIL can contribute to achieve the environmental goals of Korean government’s policies such as "carbon neutral 2050" or "reduction of 37.8% greenhouse gas emission in the transportation sector by 2030" by operating the long freight train, which is a very eco-friendly way of transportation.

KORAIL aims to launch the regular commercial operation of long freight train by the first half 2023 through improving all the problems by analyzing the information collected from various test equipment installed on the test-run train.

- In addition, as an evacuation line of about 900m or longer is needed on the operating line, consultations with the Ministry of Land, Infrastructure and Transport are also planned to solve this problem.

Na Hee-seung, the president and CEO of KORAIL said, "The long-distance freight train is a management innovation item that can dramatically improve the chronic deficit structure of railway logistics.

- To this end, we will actively pursue management innovation and fundamental financial structure improvement through the creation of new revenue models by applying safe smart rail mobility technologies such as wireless control system.”