On 19-20 September, the XXVIII CCTT Plenary meeting was held in Nur-Sultan, Kazakhstan

From 19 to 20 September 2019, at the invitation of JSC NC "Kazakhstan Temir Zholy" in the Republic of Kazakhstan in Nur-Sultan was held XXVIII Plenary Meeting of the International Association "Coordinating Council on Trans-Siberian Transportation" (CCTT).
CCTT Plenary Meeting is an annual meeting of the organization's members, which summarizes the results of the Council's activities over the past year, discusses topical issues of the functioning of international transport corridors, and develops measures to improve their competitiveness.
The format of the CCTT Plenary Meetings allows its participants to determine the future directions of CCTT work, establish business contacts, exchange experience and establish operational cooperation in the organization and development of transportation using the Trans-Siberian route.
The importance of this event is due to its support from government agencies, railways, leading operator and freight forwarding companies, transport unions and international organizations.
The 28th CCTT meeting was attended by 240 delegates from 26 countries: heads and authorized representatives of transport ministries and departments, railways, seaports, shipping, transport and logistics, security and IT companies of Kazakhstan, Russia, CIS countries, Baltic States, Europe and Asia, as well as leading international organizations and associations (UNESCAP, OSJD, CIT, UIC, FIATA, FERRMED).
The Vice-Minister of Industry and Infrastructure Development of the Republic of Kazakhstan B.S.Kamaliyev, Ambassador Extraordinary and Plenipotentiary of the Russian Federation to the Republic of Kazakhstan A.N.Borodavkin made a welcoming speech.
O.V. Belozerov, CCTT Chairman, General Director and Chairman of the Management Board of JSC "Russian Railways", noted in his speech the high transit potential of Eurasian transport routes: "The role of the railway network of Kazakhstan cannot be overestimated. It is here that all the advantages of the railway in the delivery of goods over long distances, as well as in the organization of the transcontinental route are revealed. He also stressed that due to the active work of the railways, shipping and forwarding companies, operators, seaports and state organizations included in CCTT, not only the competitiveness of the Trans-Siberian Railway, but also all Eurasian routes connecting the countries of the Asia-Pacific region and Europe is growing, competitive transport products that meet international quality standards are being created and the investment attractiveness of infrastructure projects is increasing. "Today we are witnessing an increase in the volume of rail container traffic between China and Europe, which is outpacing not only the growth rate of Euro-Asian freight traffic on other modes of transport, but also the dynamics of foreign trade turnover, - said O.V. Belozerov. - In 2018 transportations of large-capacity containers along the Trans-Siberian Railway in international traffic grew by 23% and amounted to about 950 thousand units, of which almost 214 thousand were transit ones (every fourth container). As for this year, for 8 months over 727 thousand containers were transported by Trans-Siberian Railway (excluding Dostyk border crossing). This is almost a quarter more than in the same period last year. Transit traffic amounted to 151 thousand containers.
In his speech, the Chairman of the Board of JSC "NC "Kazakhstan Temir Zholy" S.M.Mynbayev emphasized the need for further development of mutually beneficial cooperation to increase transit traffic on the route China - Europe - China. "Thanks to the work of the CCTT, simplification of the organization of transportation is ensured, and the attraction of transit and export-import cargo between Asia and Europe is increasing. Only through joint efforts will we be able to multiply the results of the development of international transport already achieved. JSC "NC "Қазақстан Temir Joly" attaches special importance to the development of transit traffic. Cargo turnover of the company is growing, for the first half of the year it reached 106 billion t.-km. The volume of transportation amounted to 134 million tons, and the growth of transit container traffic for the first half of this year grew by 41% compared to the same period last year, "- said S. M. Mynbayev.
CCTT Secretary General Gennady Bessonov reported on the implementation of the decisions of the 27th Plenary Meeting held on 3-4 October 2018 in Sochi). It was noted that the year 2019 was full of high level CCTT events. The CCTT Secretariat, together with its member partners, organized and hosted the International Conference and Symposium on Innovation in Logistics in Changchun (29-31 January 2016 with the support of the PRC Government of Jilin and the Changchun International Land Port), the fifth business forum in Tokyo (24-25 May 2019), and the fifth business forum in Tokyo. The forum was held in Tokyo with the support of the Association of Trans-Siberian Intermodal Operators of Japan, Russian Railways, Keidanren, ROTOBO, the Embassy of the Russian Federation in Japan, and the Trade Representation of the Russian Federation in Japan), as well as a number of seminars, round tables, and working meetings on the implementation of CCTT projects "Electronic Train",

The first phase of the project, the "Secure Train", the "Integrational Digital Platform", have concrete practical results.
CCTT Vice Chairmen are Harm Zivers, President of the Association of European Trans Eurasian Operators and Forwarders (GETO), Managing Director of Mukran Port; Kenjiro Masuda, President of the Association of Trans-Siberian Intermodal Operators of Japan (TSIOAJ), Oleg Melnikova, President of the Russian Association of Freight Forwarders and Logistics Organizations (FAR), and Liu Zhongyang, Deputy Director General of China Container Railway Transport Corporation, CRCT Ltd. (on behalf of Han Bolin, CEO of CRCT Ltd.) - noted the importance of development of competitiveness of the Trans-Siberian route and expansion of its geography.
Heads and authorized representatives of railways (DB CARGO AG, Belarusian Railways, Latvian Railways, Lithuanian Railways, Rail Cargo Austria AG, VR Transpoint, PKP KARGO), leading transport and logistics companies (UTLC ERA, FESCO, Eurosib, HUPAC Intermodal, New Logistic Ltd.), seaports and stevedoring companies (JSC "Vostochny Port", LLC "Global Ports Management Company", Port Narvik, Port of Sillamäe, port of Riga, etc.) discussed the prospects of development of railway corridors in communication Asia-Europe, transportation of goods in container trains on the route China-Europe-China, linear service at the sea section of the Trans-Siberian Railway.
Special attention was paid to the issues of digitalization and introduction of electronic services on the route, ensuring the safety of goods using electronic means of identification.
In particular, E.I. Charkin, Director of JSCo "Russian Railways" for Information Technologies, noted in his speech that the activities of the CCTT Working Group on the Development of Information Technologies, which he leads to the development and implementation of information technologies, new services on the Trans-Siberian route as one of the elements of the formation of competitive advantages of the railway transport, the automatization of the processes of interaction between JSC "Russian Railways" and external participants in the process of transportation, the introduction of electronic document management (legally known as the "electronic document management system"), and the introduction of the electronic document management system. Together with Russian ports and market participants, JSC "Russian Railways" is working on a number of projects to develop a comprehensive format of electronic technology for the registration of transportation under the "railroad - port" scheme.
E.I.Charkin noted the significant role of the CCTT site in the organization of connection of all carriers on the territory of which the transport corridor passes, to the work on a single technology of automated development of through schedules on the entire route of cargo transportation.
Within the framework of the CCTP project "Integrational Digital Platform", Digital Logistics LLC presented to the participants of the meeting the concept of creating a single information space for Euro-Asian transportation on the basis of mutual integration of digital logistics platforms and possible options for interaction between digital platforms of the parties involved in transportation in order to gradually move to the service of customers in the digital format.
Detailed information about the work carried out and its results was provided by A.V. Kochukov, the Head of the CCTT project "Integrational Digital Platform" and General Director of Digital Logistics LLC.
A unanimous decision was made to admit CCTT new members : CJSC Azerbaijan Railways, LLC Global Ports Management Company, JSC Vostochny Port, GC Liaoning Port, LLC Sibantratsit Management Company, LLC New Logistic, JSC KTZ Express, Belneftegaz, LLC Transtelematika Service Center, LLC SPETSKONTAINER, STARCOM G.S.P. Systems LTD, Infrastructure Economics Center LLC.
At the 28th CCTT Plenary meeting was made a historic decision to rename the Coordinating Council on Trans-Siberian Transportation into the International Coordinating Council on Trans-Eurasian Transportation (retaining the CCTT brand and abbreviation) and move the legal address of registration from St. Gallen to the Swiss capital, Bern.
The participants of the CCTT Plenary meeting expressed the unanimous opinion that linking the name to a specific route narrows the scope of the CCTT's practical activities, the geography of which is actually much wider. The CCTT currently includes more than 95 companies from 23 countries: not only railway and transport and logistics companies using the Trans-Siberian Railway, but also seaports of European and Asian countries, shipping companies that ensure the loading of railway infrastructure in Euro-Asian traffic using international transport corridors East-West, North-South.
At present, the capabilities of Russian and foreign organizations that are part of the CCTT allow today to create such a modern transport product for the transportation of goods along the Trans-Eurasian routes that would be of interest to the leading transnational shippers.

Annually held CCTT Plenary meetings have become a unique international platform not only for discussing the pressing problems of the transport business, but also a platform for developing a common technological platform and solutions that will reduce the barriers to goods movement in Euro-Asian traffic.

Reference:
CCTT is a non-profit international transport association founded in 1993. The founders of CCTT are the Ministry of Railways of the Russian Federation (since 2003 - JSC Russian Railways), Deutsche Bahn AG, the Association of Trans-Siberian Operators and Forwarders of Europe (GETO) and the Korean Association of International Freight Forwarders (KIFFA). The purpose of the CCTV is to attract transit and foreign trade cargoes to the Trans-Siberian route, as well as to coordinate the activities of the participants of cargo transportation along the Trans-Siberian route in international traffic in order to ensure high quality delivery of cargoes and development of economic relations between the countries of South-East Asia, Far East and Middle East, Central Asia and Europe using the infrastructure of Russian railways.
Over the 20 years of its existence, CCTT has become an intermodal organization whose competence extends far beyond the issues of rail transportation proper along the Trans-Siberian route. CCTT acts as a platform for establishing cooperation and interaction between railway companies and ports, sea carriers, stevedoring companies, effective information exchange between them, as well as for the development of competitive intermodal transport products. 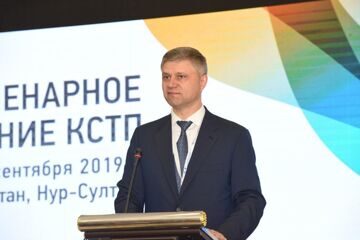 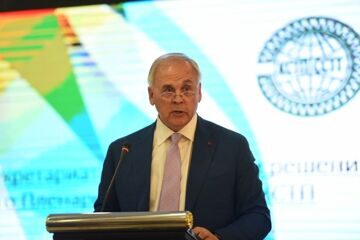