On April 12, the 25th anniversary International Exhibition of Transport and Logistics Services, Warehouse Equipment and Technologies TransRussia was opened in Moscow. 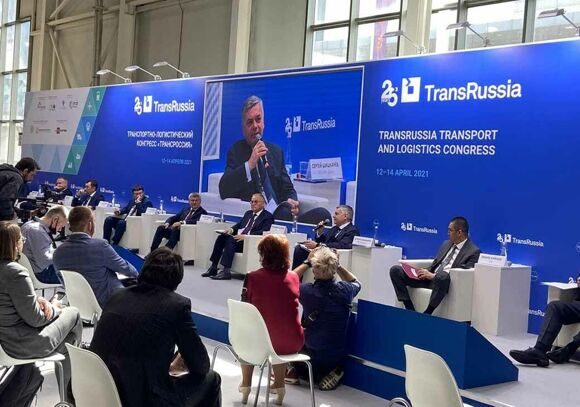 The International Coordinating Council on Trans-Eurasian Transportation (CCTT) co-organized the business program of the TransRussia exhibition. On April 12, in the main hall of Transrussia Pavilion 1.4, a plenary discussion "The development of cargo transportation in modern realities. Trends, prospects, limitations, new opportunities", moderated by the Mr. Gennady Bessonov, CCTT Secretary General. During the discussion, participants of the transport market, managers and representatives of railways, transport and logistics companies, operators and freight forwarders, international organizations, as well as representatives of postal companies discussed topical issues related to new growth opportunities and constraints to the development of the Russian transport industry, the current state of the transport services market and upcoming plans for 2021. Also on the agenda was the issue related to the impact of the coronavirus pandemic on the development of rail transport and the transport industry as a whole.

In their speeches, the speakers noted the main logistics trends and directions of transit development, ways to increase the speed and optimize the delivery time of goods along the Trans-Eurasian routes in China-Europe-China connection. The participants of the Plenary discussion noted the need to develop and modernize the infrastructure at border crossings to increase the capacity and ensure the continuous delivery of goods. An important factor in the development and increase in container cargo transportation last year was the introduction of subsidies from China, which allowed Chinese shippers to ensure a constant cargo flow of goods to Europe. Despite the challenges that all participants of the transport market had to face last year, the companies managed to combine their efforts and achieve high performance. In this regard, it is worth noting the increasing role of modern digital services in ensuring transport stability and interaction of all players in the transport chain.

The first speaker at the discussion was Sergey Pavlov, First Deputy General Director of OJSC RZD. Summing up the results of last year, he outlined the successes achieved by the OJSC RZD, noting that the monopoly attracted record volumes of containers to the network. According to the results of the first quarter, container transit through Russia transported 230 thousand tons of TEUs with an increase of 73% compared to the same period last year, and in the busiest East — West direction, the increase was 126%, as Pavlov. He also noted that over the past 6 years, the volume of transit traffic has increased 13 times. And on the horizon until 2024, it is expected to increase the volume of container transit by 4 times. At the same time, the development of the Trans-Siberian Railway remains a priority for OJSC RZD.

The representative of the Ministry of Transport of the Russian Federation, Director of the Department for International Cooperation R. V. Alexandrov also had a speech during the discussion. In his report, he stressed the importance of creating an international regulatory framework for multimodal transport, specifying that together with foreign colleagues, the Russian transport agency is preparing a "multimodal convention".

In his speech, the founder and President of Delo Group S. N. Shishkarev noted the proposals for including the containerization of the Russian cargo base as a separate section in the draft Strategy for Socio-economic Development of the Russian Federation for the period up to 2030. The corresponding proposals of Delo Group were sent to the Government of the Russian Federation a month ago. They are based on a well-founded thesis about achieving the intermediate target of the main level by 2030 — the total volume of containerization of the cargo base in Russia at 10%. Shishkarev noted that this task is not only economic, but also social reasons: as a result, you can expect the reduction of logistics share in the final price of goods and, as a result, direct the released funds to investment. In addition, as a result, this will allow us to more effectively control the growth of prices in the country, which the authorities are now focusing on in their work.

A. N. Korostelev, President and Chairman of the Management Board of FESCO TG, spoke about the consequences of blocking sea container traffic on the Suez Canal and noted the significant transit increase via the Russian Railways network in this regard.

Issues related to postal transportation were noted in their speeches by I. V. Chebunin, Member of the Management Board, Deputy General Director for Logistics, JSC "Russian Post" and K. K. Altysbayev, Chairman of the Management Board, JSC "Kazpost". They noted the prospects for the development of postal services using various types of transport, which will optimize the delivery time to hard-to-reach regions. Mutually beneficial cooperation of postal companies can lead in the future to facilitate cross-border interactions of customs authorities in mail transportation.

Due to the increased demands on the quality and safety of transport services in the context of the pandemic, digitalization is of particular importance. The integration agenda of the EAEU pays considerable attention to this issue. This was stated by Emil Kaikiev, member of the Board (Minister) for Energy and Infrastructure of the Eurasian Economic Commission. According to the EEC Minister, in the Greater Eurasia region, it is important to ensure the transportation of goods using the most modern tools, regulatory mechanisms and technologies that rely on digital solutions. This will allow us to achieve coherence of all elements of the supply chain," seamless " transportation and end-to-end logistics, eliminating differences in the technological aspects of the functioning of transport industries. Mr. Kaikiev noted that the Commission, together with the transport ministries, is finalizing the "road map" for the implementation of the EAEU transport policy for 2021-2023. In the near future, the Union plans to address issues related to the regulation of mixed and container transport, the expansion of air traffic, the development of intelligent transport systems and the introduction of digital technologies.

During the pandemic, China not only managed to maintain the growth rate of cargo transportation, but also to break new records. It mentioned in his speech the Secretary General of the China International Association of Freight Forwarders (CIFA), Mr. Li Zhiming. China is the initiator of the “One Belt-One Road " project, under which China Railway Express container trains run on a regular basis. The joint work of Chinese shippers and Russian operators has made rail transportation more competitive in comparison to other modes of transport and created additional conditions for attracting a new cargo base, as well as new players in the transport chain.

Mr. Fabio Amato, Senior Vice President of Strategy and Business Development, Mercitalia Rail spoke about the measures taken by European railways to increase freight traffic and eliminate the consequences of the coronavirus pandemic. Despite the current restrictions and quarantine measures in many European countries, Italian railways are trying not only to maintain but also to increase the existing cargo base, as well as to attract new customers, which will undoubtedly have a positive impact on the volume and dynamics of traffic on Trans-Eurasian routes. 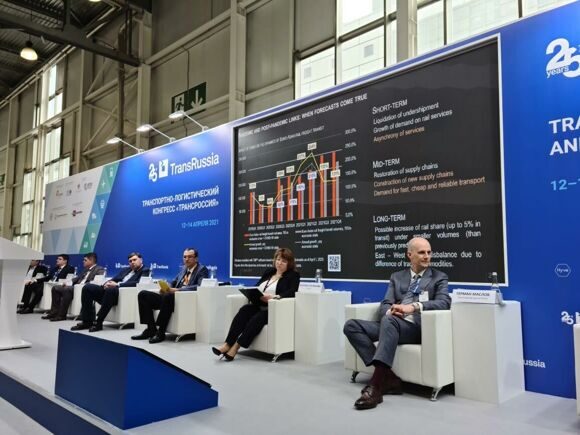 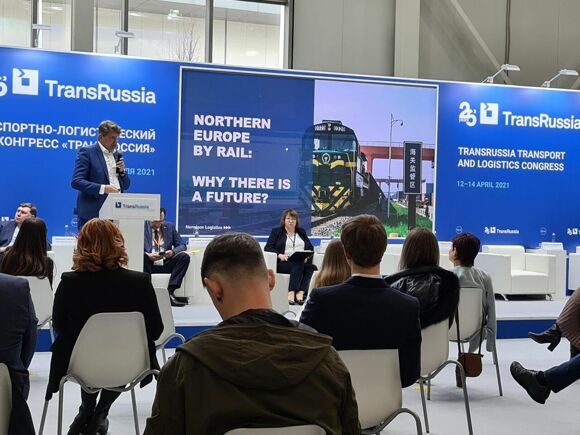 The panel discussion "The future of container transport", moderated by the CCTT Deputy Secretary Stepanova N. N., was devoted to the impact of COVID-19 on the development of container transport, rail container services in the China – Europe – China connection in the context of reducing subsidies and cargo flow imbalances, expanding geography and new multimodal services, containerization of agrologistics and digitalization of logistics services. Managers and representatives of railways, seaports and transport and logistics companies in Russia and Europe (JSC "Russian Railways Logistics", PJSC "TransContainer", JSC " Eurosib SPb – TS", JSC UTLC ERA, TG FESCO, JSC "PKP CARGO", Rail Cargo Logistics-RUS, Hupac Intermodal SA, Nurminen Logistics Oyj, METRANS Group, Mukran Port, LLC "Soyuzkhimtrans-Avto", LLC "Europak") shared their experience in implementing management mechanisms and optimizing supply chains, informed guests and participants about the implementation of their projects aimed at the development of cargo transportation, as well as offered unique solutions that allow not only to eliminate the consequences of a pandemic, but also attract a new cargo base to existing routes. The closure of borders and the quarantine regime in many European countries has led to an increase in the importance of rail transport in the entire transport market. In this regard, in 2020, many cargo flows were reoriented from air and sea transport to the railway. The existing transit railway routes running through the territory of the Russian Federation, including the Trans-Siberian Railway, make it possible to transport goods in containers quickly, safely and at an affordable price.

The annual TransRussia exhibition is a unique platform and a landmark event for the integrated solution of business problems, where industry representatives meet and get acquainted with a large number of companies, negotiate with the management and leaders of the transport and logistics industry, find new service providers and choose the most favorable terms of cooperation.