On October 13, 2021 was held a meeting of the joint Working Group "CCTT-RZD-MAV"

On October 13, the 6th meeting of the joint working group CCTT-RZD-MAV was held in the format of a videoconference, which was chaired by Mr. Istvan Virag, Deputy Director General for Infrastructure Operations of MAV Zrt.

During the meeting it were considered the issues of the current situation and prospects for the development of Eurasian railway container transportation in connection with Europe, the current situation and prospects for the development of the Zahony region were noted, as well as measures to improve the quality of services aimed at more efficient use of transit advantages of Hungary and attracting additional cargo flows to the rail route through Zahony. The participants, representatives of transport and logistics companies - members of the CCTT presented information and proposals to improve the competitiveness of container transportation between Europe and Asia using the rail freight corridor No. 6, noted the rapid increase in the volume of container rail freight and the need to modernize the infrastructure of Hungarian border crossings to increase the capacity for container trains in China-Europe-China connection. In particular it was noted the need for the development of the Zahony transshipment area, which is often called the Gateway of Hungary to the East. The Zahony transshipment area, as a checkpoint of the international transport corridor Trieste - Budapest - Kiev - Moscow - Khorgos (China) is an important hub for rail transport in the East-West connection due to the fact that the European railway gauge (1435mm) and broad gauge (1520mm) meet here. The main activity of the company Zahony Port is the transshipment of goods arriving from Asian and CIS countries through the border crossing points Chop-Zahony and Batevo-Epereshke, between rolling stock 1520 mm gauge and 1435 mm gauge. In addition, the company provides additional logistics services, transshipment of goods to road vehicles, warehousing, customs and forwarding operations. 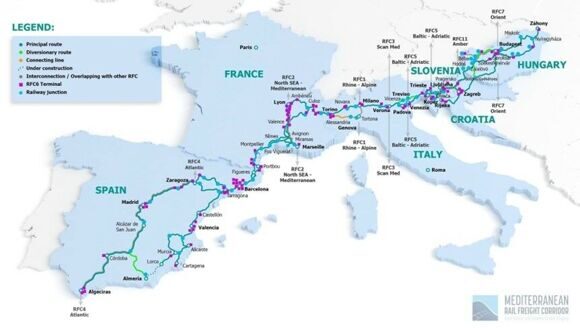 The General Director of East-West Gate, Mr. Janos Talosi, informed participants about the construction of a new rail terminal in Feneshlitka, which will become the gateway of the New Silk Road, offering a wide range of services and making it possible to expand rail container traffic between East and West.

Ms Yulia Kosolapova, General Director of JSC RZD Logistics in Europe in her presentation noted increasing in the competitiveness of rail freight transportation at the background of an increase in freight rates for the transportation of containerized cargo by Deep Sea, as well as the cost of air transportation. The increase in the volume of cargo transportation in the China-Europe-China connection and the post-crisis situation in the transport and logistics market led to a shortage of infrastructure capacities of border crossings, in particular, when carrying out cargo transportation in the Asia-Europe message through Brest/Malaszewicze, Kaliningrad and Far Eastern ports. In order to eliminate this phenomenon, Russian Railways is modernizing the Eastern Polygon and reconstructing the BAM, which will increase the capacity of container traffic on the Trans-Siberian Railway from 144 million tons to 180 million tons. At the moment it is proposed to reduce the load on the main border crossings and increase the speed of cargo delivery, as well as using alternative routes, including through Hungary.

Taking into account the information provided, the discussion of various aspects of transportation to/from Central and Southern Europe with the use of the capabilities of the Zahony dry port will be continued during subsequent meetings on the CCTT platform.

In accordance with the decision of the 22nd CCTT Plenary Session, as well as in order to develop railway container transportation in Europe-Asia-Europe connection using the Trans-Siberian Railway and the RFC No. 6, a joint working group of the CCTT-RZD-MAV Zrt. (Hungarian State Railways) was established. The increase in cargo flows in the China-Europe-China connection, as well as the need to diversify routes, caused the revival of the CCTT-RZD-MAV working group and made its development relevant and especially important.