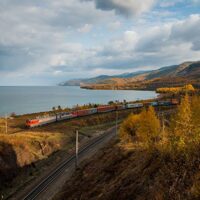 The Trans-Siberian corridor is a major component of the system of international transport corridors, and its significance for foreign economic relations in terms of developing trade between the countries of Europe and Asia is obvious to the world economic community.

The Transsib - the most rational route of interconnecting the Eurasian continent by the common infrastructural project with a global impact. Today it is the fastest and negotiable route for freight transportation from the East to the West and from the West to the East, which can and should become the catalyst of multiple growth of goods exchange speed between the countries of Europe and Asia.

The main advantage of the Transsib, short transit time of a cargo delivery, is unquestionable, but is not the only one. Today the range of transport and logistic services offered on the Trans-Siberian Route meets the highest international standards.

Many modern historians compare construction of the Trans-Siberian Mainline to space conquest in the middle of the twentieth century.

The total volume of the international rail transportation via the Trans-Siberian Mainline is on the rise.