On September 14-16, the XV International Forum on the Development of Transport Corridors TRANSTEC was held with the support of the CCTT. The event was held in a hybrid format - in two cities: in Moscow and St. Petersburg, connected by a teleconference. The online broadcast in several languages provided the widest audience coverage in the history of the forum: 600 delegates and over 150 companies from 36 regions of Russia and more than 30 foreign countries: Germany, the Netherlands, Spain, Denmark, India, Iran and Singapore.

Presentations and discussions focused on the most topical issues of the industry, such as the development of international transport corridors and transit potential of Russia, the use of mechanisms of public-private partnership in the implementation of transportation projects, infrastructure projects, ensuring economic and transport connectivity in the East of Russia, networking companies in the transport-logistics complex on international routes Asia – Europe, the creation of a single regulatory framework for all participants in the transport market, the digitalization of the transport and logistics industry, and the management of supply chains in transport corridors.

The forum addressed topical issues ranging from container cargo transportation to IT technologies in transport and digital corridor ecosystems. Forum participants, operators and freight forwarders, representatives of Russian Railways noted the growing role of information technologies, the need to continue the digitalization processes in transport, and also presented their projects and services. These modern approaches, such as the use of blockchain technology, the Electronic Trading Platform "Cargo Transportation" service, and the use of electronic seals, will help facilitate the procedure for passing interstate borders, which will undoubtedly have a positive impact on the speed and volume of cargo transportation. The experts shared their views and made suggestions on what steps should be taken to preserve and strengthen Russian status as a transit power and how to build international cooperation within the framework of the North – South International Transport Corridor. Special attention was paid to the development of the Ust-Luga seaport, the prospects for the development of the Northern Sea Route, as well as the existing infrastructure on the route, the creation of SEZs and new terminals in the Olya seaport.

For reference: The International Forum on the Development of Transport Corridors TRANSTEC has been held since 1994 and gathers the widest audience of representatives of federal and regional authorities, transport market participants, contractors and suppliers of transport construction, authoritative experts and analysts, investors, financial structures to discuss strategic plans and topical issues of the development of high-tech transport corridors in Russia and their integration into the system of international logistics routes. The event is traditionally held with the support of the Government of St. Petersburg, the Maritime Council under the Government of St. Petersburg, the Committee of St. Petersburg for Arctic Affairs, JSC TSNIIMF and the Association of Commercial Sea Ports. Due to the coronavirus pandemic, this year's forum was held for the first time in a hybrid format and was available not only for delegates presented in person, but also in an online format. 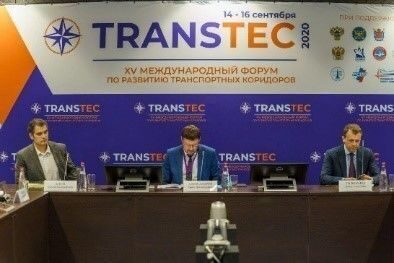